Each year, 29th October sees the world celebrating the internet; a technological marvel that we now take for granted and has made the world a much smaller place, connecting us in ways that 100 years ago would never have seemed possible.

We were reminded a little bit of this earlier this month when Facebook, WhatsApp and Instagram all went down together for approximately 6 hours. Of course, we still had the internet, but the disruption of losing just these three types of social media reminded us how much we have come to rely on the internet for ease of access to information and communication.

Who invented the internet?

When thinking about who invented the internet, people often mistakenly credit its invention to Tim Berners-Lee. What Berners-Lee did, whilst working at CERN, was to create the World Wide Web. But hey, aren’t they the same things? Well, actually, no!

So why do people often credit him for it? Well, it’s all a bit technological and rather than try and reinvent the wheel with a big explanation in this post, please check out this great report from History.com who share some of the key people and their inventions, such as packet-switching, that helped create the internet we know of today.

As you will learn from the linked post above, it was several inventions which, when combined, enabled the following to happened and was the first time the internet worked…

On October 29, 1969, Charley Kline, a young grad student at UCLA attempted to send the first Internet message to Bill Duvall, a colleague at Stanford University. They had been working on a project called ARPANET (Advanced Research Projects Agency Network). ARPANET was a U.S. Defence Department-funded network that connected four terminals that had been installed at UCLA, Stanford, UC Santa Barbara and the University of Utah.

Whilst the message they attempted to send “LOGIN” didn’t work entirely, they did manage to send part of that message and thus, the internet was born.

How can we celebrate International Internet Day in school?

The obvious opportunity comes in sharing about the day in any school assemblies you might be running, but there are many ways that you could recognise those involved in creating the internet in lessons. For example: 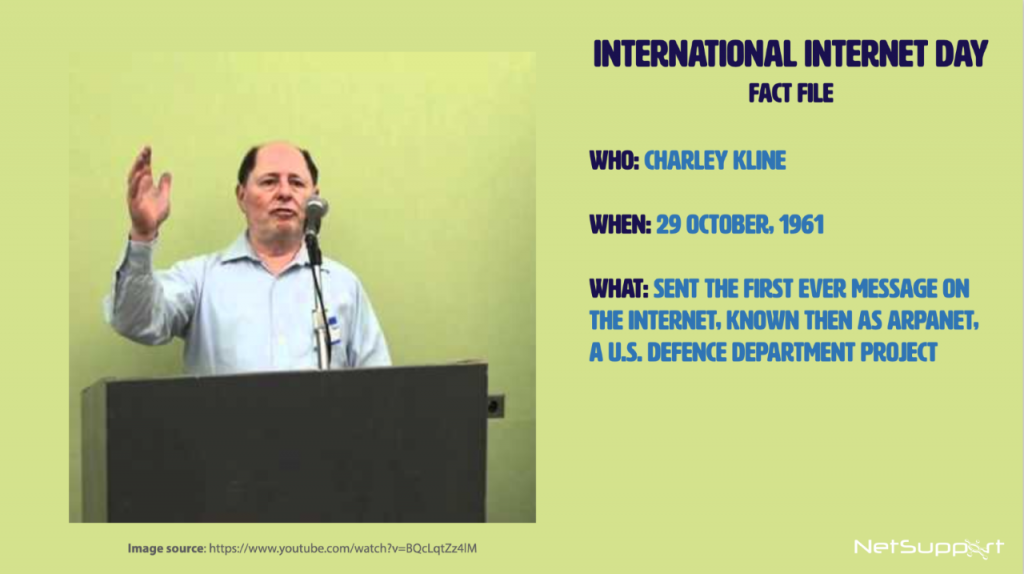 Whichever way you look at it, the internet has changed our lives immeasurably and arguably has made the world a much smaller, better-connected place. We hope you enjoy celebrating this important discovery and innovation with your learners. If you do undertake activities on the day or days around International Internet Day, why not tag us on Twitter using @NetSupportGroup – we would love to hear from you!